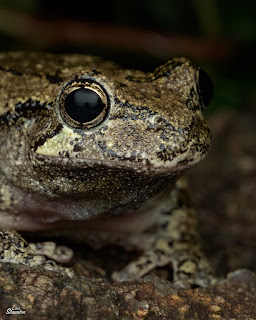 Gray Treefrog getting ready to sing the song of his people.

This Gray Treefrog (Hyla versicolor) was crawling up the face of a rock next to a nearby pond so he could get into a good spot to look for a girlfriend.

The vocal sack apparently amplifies the trilling sound he makes.  Pretty nifty.  He’s got a built in amplifier.

According to the Virginia Herpetological Society website, Hyla is Greek for “belonging to the woods” & versicolor is Latin for varied color. 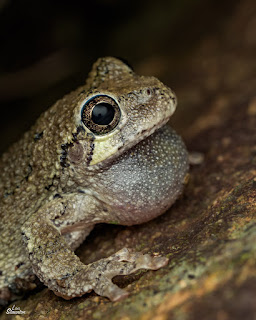 They gather near water during breeding season, but hang out in trees in the woods the rest of the year. Which presumably explains the Hyla portion of their scientific name.

They’re very cute little frogs at about 1.5-2” (3-5 cm). I’m looking forward to them making their appearance again once the temperatures are a bit warmer here.