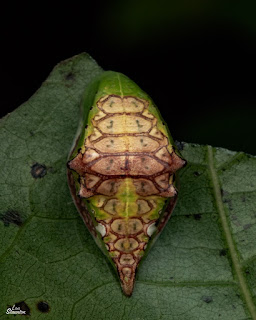 When you think of caterpillars, is this the shape you picture in your mind?

This diamond-shaped cutie is, indeed, a caterpillar, though.

Specifically, a slug caterpillar, and more specifically a Skiff Moth Slug Caterpillar (Prolimacodes badia).  “Skiff” because they’re thought to resemble the shape of a skiff boat if you look at them in profile.

This particular ‘pillar has one of the prettiest patterns I’ve seen on a Skiff.  Their markings often mimic damaged leaves, & this one definitely has that going on. Of course, it’d probably work better as camouflage if he was on a leaf with more damage, but can’t have everything.

They’re one of the few local Slug ‘Pillars that we often find on the top of leaves. Most others lurk on the underside of leaves.

The one above is also sporting the two bilateral white spots frequently seen on this species. These spots look remarkably like the Tachnid fly eggs one will sometimes also see on these & other Slug ‘Pillars. 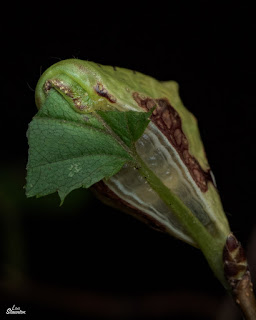 It’s hypothesized those are intended to fool Tachnid flies into thinking another Tachnid already laid an egg on the caterpillar & that she should, therefore, keep on moving to find another caterpillar to play host to her baby.

As with the rest of its Slug ‘Pillar cousins, this species keeps its head tucked under its body even when it’s eating — as you can see in the 2nd pic.