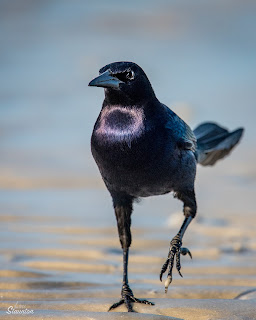 Boat-tailed Grackle patrolling his beach.  Or at least he appears to believe it's his & his alone & looks like he's intent on running off this pesky photographer.

According to info on Cornell's All About Birds website, the population of these beautiful birds has fallen by nearly 50% since 1966. Habitat loss from coastal development is blamed for the decline.

On the other hand, Cornell reports that these grackles have adapted to living with humans by picking through our trash & by setting up shop in our relatively predator-free urban areas.

A couple other interesting tidbits gleaned from Cornell's info:

This fellow was along the gulf coast of Florida. We know he's a fellow because females are brown & half the size of a male like this. To the casual observer, females would appear to be a different species altogether. 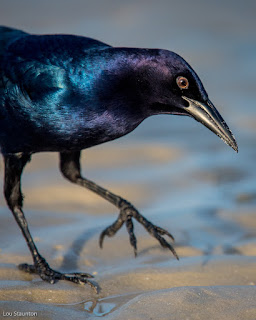 From what I read on Cornell’s website, it’d be obvious to a knowledgable birder that this fellow was on the gulf side of Florida because he has brown eyes. If he lived along the Atlantic coast of the US or other parts of the Gulf Coast, he’d have yellow eyes.