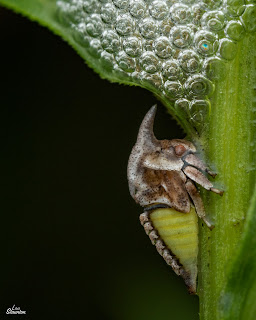 "Gimme Shelter."  This little Stegosaurus Hopper Nymph (aka Wide-footed Treehopper or Campylenchia latipes) appeared to be sheltering from the rain under the bubble nest of a Froghopper Nymph (aka Spittlebug or Cercopoidea).

Quite sensible, & it mostly worked.

From a photography standpoint, I was pleased by the repetition of triangles.

The bubbles, I thought, looked a bit like a big clump of balloons.

From an “I’m fascinated by bugs" standpoint, I’m enthralled by the architecture of these little nymphs.

While it’s usually obvious what a hopper nymph’s disguise might be trying to mimic, this one stumps me.

It sure looks to me like they’re dressed up in a stegosaurus costume.

Maybe he thinks he looks like, hmmm, I don’t know… A grass seed? A thorn?

Or maybe he thinks he looks like a stegosaurus & is quite pleased with himself. 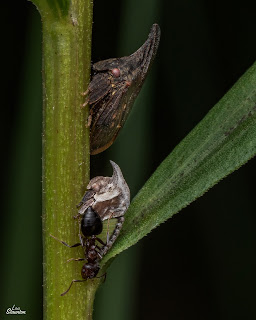 In the second pic, the nymph above has grown into an adult & is hanging out with another nymph & one of their ant guardians.

As an adult, these hoppers clearly look like thorns.  However...  I've only ever found them on Goldenrod (Solidago) plants, which never actually have thorns.

Puzzling choice, but it presumably works for them.

The second nymph morphed into an adult not long after, but I liked this particular shot since it showed both stages of the hopper & also the relationship with the ant tending to the hoppers.

The hoppers are Wide-footed Treehoppers or Campylenchia latipes, & I believe the ant is an Acrobat ant (Crematogaster genus).

The ants defend their hoppers in exchange for the sweet honeydew the hopper provides for food, which is known as mutualism.

I recently saw a study that concluded, not only that the ants & hoppers benefited from their relationship, but that the plants also benefit because the ants drive chewing insects away & also kept the plants clean, which discouraged fungal growth.

Also, mom hoppers with attendant ants lay additional batches of eggs elsewhere on their healthy plant while the ants tend her nymphs — thereby creating more honeydew producers for the ants.

Pretty cool set-up for all involved.

And, FYI, one of the easiest ways to find small hoppers that are well camouflaged is to look for the busy ants tending them.